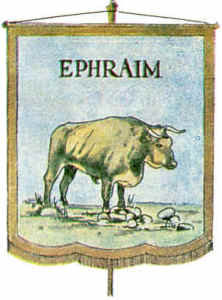 “Now the Ephraimites asked Gideon, “Why have you treated us like this? Why didn’t you call us when you went to fight Midian?” And they challenged him vigorously.”

Remember that Gideon was from the clan of Manasseh – an important point. Ephraim and Manasseh were both children of Joseph and even though Manasseh was the oldest, Jacob blessed Ephraim before Manasseh and said that Ephraim would be the more dominant.

“In your[c] name will Israel pronounce this blessing:
‘May God make you like Ephraim and Manasseh.’”

So he put Ephraim ahead of Manasseh.’

It would seem that these Ephraimites took this very much to their head. Later in Judges 12 they get angry with Jephthah accusing him of not involving them.  Ephraim continued to be arrogant. In the schismatic division of the nation Ephraim became the dominant tribe in the north. This can be seen by the fact that the prophets often refer to the northern tribes as Ephraim:

After I strayed,
I repented;
after I came to understand,
I beat my breast.
I was ashamed and humiliated
because I bore the disgrace of my youth.’
20 Is not Ephraim my dear son,
the child in whom I delight?
Though I often speak against him,
I still remember him.
Therefore my heart yearns for him;
I have great compassion for him,”
declares the Lord.

One final remark from the paper is worth considering:
Is it due to the arrogance of Ephraim that they failed to listen to the prophets and were eventually evicted from their land by Assyria in 722BCE, never to be heard from again?