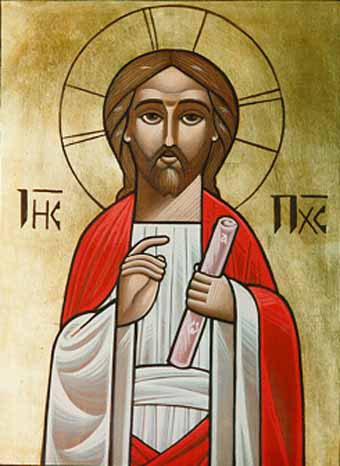 2. The Problem After reading Matthew, Mark and Luke a first-time reader of the New Testament is presented with a bit of a problem when reading John. John is different to the synoptics in both content and style. There are no parables, which frequent the synoptics, while there are seven distinct “I am” statements. Certain events in John are placed in a different order, such as the cleansing of the temple which appears close to the beginning of the Gospel of John, but is placed after the triumphal entry in the synoptics. In John, Jesus has a long debate with Pilate at his trial, whereas in the synoptics he is quiet. John contains no exorcisms but John also contains many talks about eternal life. His discussions on the Holy Spirit have no parallels in the synoptics.

3. Criticism Clement of Alexandria1 was the first to comment on this difference with his famous statement that John was a “Spiritual Gospel”. More recently scholars have made harsher judgements: Casey2 attacks more conservative studies saying that John ‘is profoundly untrue. It consists to a large extent of inaccurate stories and words wrongly attributed to people.’ Funk and Hoover3, part of the Jesus Seminar, asserted that all but three of Jesus’ sayings in John bear no resemblance to his authentic teaching. Hanson4, more politely, yet nevertheless sceptical, says that John has an independent historical tradition that is “inferior” to that of the synoptics. J. D. G. Dunn5 commenting on historical Jesus scholarship says, “Few scholars would regard John as a source for information regarding Jesus’ life and ministry in any degree comparable to the synoptics.”

inaccurate. On top of that, one could consider the grey areas between each easy to define possibility. It should be considered that it is not exactly three against one. Most scholars consider that Matthew and Luke are built on Mark and so there is only one independent structure/basic style (not source) as far as the synoptics are concerned.6 In this essay I will consider the conservative position that both the synoptics and John are accurate.

To bring a little simplicity to a complex situation I want to consider a simple, logical approach similar to that used by the Professor in The Lion, The Witch and The Wardrobe7. In the Lion, the Witch and the Wardrobe, Lucy, a kind honest little girl enters a wardrobe and discovers a magical land with mythological creatures. She claims that her brother Edmund (an occasional liar), has been there too. Peter and Susan her elder siblings are puzzled. What Lucy describes seems so different from what they know that they side with Edmund, who is generally unreliable. In conversation the Professor asks them whether Lucy or Edmund is the most reliable. Then using logic, he proposes that there are only three possibilities: Lucy is lying, she is mad or she is telling the truth. Since she is not a liar, they can rule out lying, and since she is not mad they can rule out the second option. Thus they are left with the third option – she is telling the truth. As the existence of a magical land did not fit with what Peter and Susan knew, so the Gospel of John is different in many respects to what a reader of Matthew, Mark and Luke knows about Jesus. Many from Clement of Alexandria to this day, have explained this difference by dismissing John. However, the writer of John insists that what he is telling is based on what he has seen and is true (John 21:24). Thus I suggest we consider whether the writer is lying, mad or telling the truth.

4.1 Lying Is John lying? The book seems to be addressed to Christians, with the purpose of encouraging them to keep believing in Christ (20:31). As we cannot compare John with video footage of what happened let us consider any motivation he may have for lying. It may help to think of the basic carnal drives of men: money, sex and power. Those who are out for themselves usually pursue one or more of these. If a person’s revelation benefits them significantly then one must consider whether this is a genuine revelation or rather has been devised to benefit the spurious prophet. Many of those who have claimed to have received messages from heaven have done quite well out of their revelations. Take Muhammad for example. Through his revelations he gets money (Sura 8:41) which makes him rich (Sahih al-Bukhari, Volume 3, Book 37, Number 495). His marriage to a fifth wife, who was previously married to his adopted Son is justified (Sura 33:37), and on top of that his revelations say that he is the most important human being that ever existed – the last prophet (Sura 33:40). Though the number of wives is permitted to be four, Muhammad has 11. Muhammad profited very well from his position and revelations. At the very least this looks suspicious. This type of profiting is not uncommon however: The selling of indulgences was essentially false prophecy designed to give the Catholic Church more money. In his early life Joseph Smith made money as a

seer who could see treasure through the ground. He never found anything, but collected plenty of money.8

However, there is no obvious motivation present in the gospel of John. Does John profit financially from this book? No. There is no hint that believers should offer money to him. Does he acquire women? No. What about power? Not really. There are references to John but he is very much in the background. He is given the title “the disciple whom Jesus loved” and is shown as one who was in the inner ring of disciples, but this was already made clear in the synoptics. Is the motivation to make Jesus look divine when the synoptics do not? In John Jesus is portrayed as being divine more explicitly than in the synoptics, but the claims are definitely there in the synoptics.9 Is John trying to propose a new way to be saved? No. In brief, there is no obvious benefit that John receives from this book, which he would not have had through the synoptics. Thus there seems no reason for believing he is lying to obtain benefits for himself or any particular cause.

4.2 Madness If a mad man or woman was to write a book then you should see some of the following characteristics present: lack of structure (confused thinking), extreme tones reflecting aggression or depression, monomania in some form, or similarly conspiracy theories, and possibly fantasy.10 In contrast the book of John is beautifully structured with, for example, seven ‘I am’ statements, mention of precisely seven disciples and the signs carefully arranged around discussions, very deliberately. Even critics of the historicity of the gospel are clear that this book has a serene tone.11 (In fact they believe that if this was written by one of the ‘Sons of Thunder’ it would be a lot more aggressive.) There are key themes that come up again and again but not monomania. Regarding conspiracy theories it is clear that Jesus was not popular with the Jews but this is nothing different than what is found in the synoptics. Regarding fantasy, all of the miracles in John have similar parallels in the synoptics. Thus there is no reason for believing that John is mad.

4.3 Truth If John is not lying and seems perfectly sane then the most likely option is that he is telling the truth. For a comprehensive in-depth discussion arguing for the truth of each part of the gospel I would recommend Blomberg’s The Historical Reliability of John’s Gospel.12

5. A Proposal In this section I will consider a possible reason for the differences between John and the Synoptics. It is possible that Jesus used a different teaching style while conversing with the learned Jewish leaders. This is not implausible as can be seen with Paul. In Athens Paul uses a different style in reaching the intellectuals than he does with the more ordinary folk (Acts 17). The style of teaching Jesus uses in John was not mentioned in the synoptics. Perhaps after the fall of Jerusalem, the synoptic writers felt that this was not relevant, or would not produce results. Paul’s change in style

did not yield much fruit, and he went back to his normal style after Athens. However, some may have been aware that Jesus said things that were not recorded by the synoptics. With the birth of early Gnosticism, some may have thought that Jesus had said things in line with Gnostic beliefs – the sort of things that later appear in the Gospel of Thomas.13 (There are many examples of people guessing as to what Jesus said and did. Take for example the infant gospel of Thomas,14 where a 2nd Century writer has tried to guess what Jesus was like as a child.) To counter this, John, or his disciples, who were aware of this extra teaching/style, though perhaps had not proclaimed it loudly, set the record straight by clarifying the untold story of what Jesus said and did. Thus the gospel seeks to complement the synoptics, not to challenge or replace. I am by no means certain that this is true but propose it as a credible possibility.

In this essay, rather than consider all the many complex possibilities, I have gone to the key issue. Is John giving an accurate testimony as he claims or not? By considering three more simple alternatives I have argued that he is. This essay is not intended to be water tight, but rather a more simple heuristic proof of historicity in a complex situation.

Lewis, C.S., The Lion, The Witch and The Wardrobe, London: HarperCollins, 1950