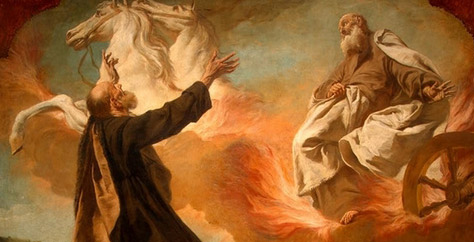 When Elijah flees for his life to Mount Horeb God tells him “anoint Hazael king over Aram. Also, anoint Jehu son of Nimshi king over Israel, and anoint Elisha son of Shaphat from Abel Meholah to succeed you as prophet” (1 Kings 19:15-16). Elijah only got round to anointing the latter.

In some ways he is very similar to Elijah; in other ways he is quite different.

Both help widows in similar ways. Elijah helps a woman who is about to eat her last meal and die.”The jar of flour will not be used up and the jug of oil will not run dry” (1 Kings 17:14). Elisha helps a woman in debt  who will have to sell her sons into slavery by a similar means: she was told to pour out what little oil she had into lots of empty jars borrowed from neighbours. After they were all filled with oil she was told to “Go, sell the oil and pay your debts. You and your sons can live on what is left” (2 Kings 4:7).

Elijah had little to do with the authorities except to pronounce the Lord’s anger on judgement on them. Elisha gave lots of advice to the kings, warning them about the enemy’s whereabouts on several occasions. He also had dealings with Namaan the commander of the army of the king of Aram. He also spoke to Hazael who he prophesied would become king of Aram.

Relationships with other prophets

Elijah was quite a loner, at times he even seemed to think that he was the only true prophet left (1 Kings 19:14), which wasn’t the case. Obadiah had hid 100 prophets from Jezebel (1 Kings 18:4), and there were probably more than that around. He has very little to do with the schools of prophets that were around at the time.

Elisha got other prophets to perform important tasks such as anoint Jehu king of Israel (2 Kings 9:1-13). He met with the company of the prophets (2 Kings 4:38), he encouraged them in building a larger dwelling for themselves (2 Kings 6:1-7), he performed a miraculous provision of food for them (2 Kings 4:42-44).

These bands of prophets seem to have been around for a while. The first time we hear of them is in connection with Saul, “As you approach the town, you will meet a procession of prophets” (1 Kings 10:5).

For an interesting article on Elisha see: http://jbq.jewishbible.org/assets/Uploads/294/294_Elisha1.pdf