Brief Notes on 1 and 2 Maccabees 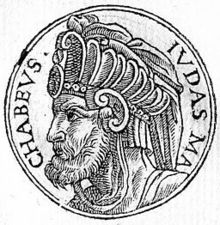 Alexander the Great son of Philip of Macedonia wins against Darius of the Medes and Persians. Kills many kings. When he dies  he splits his empire up among 4 generals who grew up with him.

A bit further on Antiochus Epiphanes defeats Egypt. Then wants all his lands to give up their religions and sacrifice the Greek way, and follow Greek customs to break the law and propane the sabbath.

A gymnasium is built in Jerusalem. Some rebel and are killed. Some are attacked on the sabbath and refuse to fight back and are slaughtered.

Mattathias was a priest who rebelled against the decree to sacrifice. In medion. He was filled with zeal and killed a Jew who was sacrificing on a Greek alter. He is compared with Phineas who killed an Israelite sleeping with a Moabite. Matthias wins some victories. Then he dies and Judas his son takes over as commander; Simeon also his son is said by him to be wise and will be a father to them.

Judas beats Appolonius, defeats and kills him and uses his sword always after that. Also beats Seron and Georgias, and Lysias. Then they go and cleanse the temple and the sanctuary and strengthen the walls and towers. They then celebrated the feast of dedication for 8 days.

A Seleucid King comes from Rome and takes over. It seems as if Jerusalem is taken over during this period.

There is a long section concerning the rise of Rome and their treaties. Judas sends an envoy to Rome to make an alliance.

There is a big battle and Judas is killed. The lament is similar to that for Saul and Jonathon. Simon and Jonathan take over. Their brother John is killed and they take revenge during a wedding.

They make peace with Bacchidus and the land has peace.

The Maccabees family become priests rather than kings.

They have good relations with Rome and the Spartans. They send a golden shield to Rome.

The political climate is complicated. The descendants of Antiochus Epiphanes and also Demetrius are still around.

Ptolemy King of Egypt gets involved. He gives his daughter to Alexander son of Ant. Epi. Eventually he attacks Palestine and is too powerful for Alexander.

There is a lot of deceit which often leads to a Maccabee being killed.

Jonathon is killed late on and Simon takes over. Right near the end Simon and two of his sons are killed and another son John is the new high priest.

Quite long introduction. Writer says Jonathon has written five books about the events. He will abbreviate.

No Mattathias. Story starts off in Jerusalem. Judas is alive the whole time.

There is a greater emphasis on Martyrdom. The mother and seven sons in chapter 7 are tortured and killed. They rebuke their torturers, say that they are suffering for “our sins” and look forward to the resurrection.

Seven sons seen as a great blessing and losing seven sons as an absolute disaster.

Also in Chapter 14 a man is being pursued and commits suicide looking forward to his body being remade by God.

A lot of the time in both books – people who are discontent go to the King or oppressor and report the Jews for doing this or that, hoping to get a position in a new order.

Strange story about raising money for a sub offering for the dead in chapter 12.