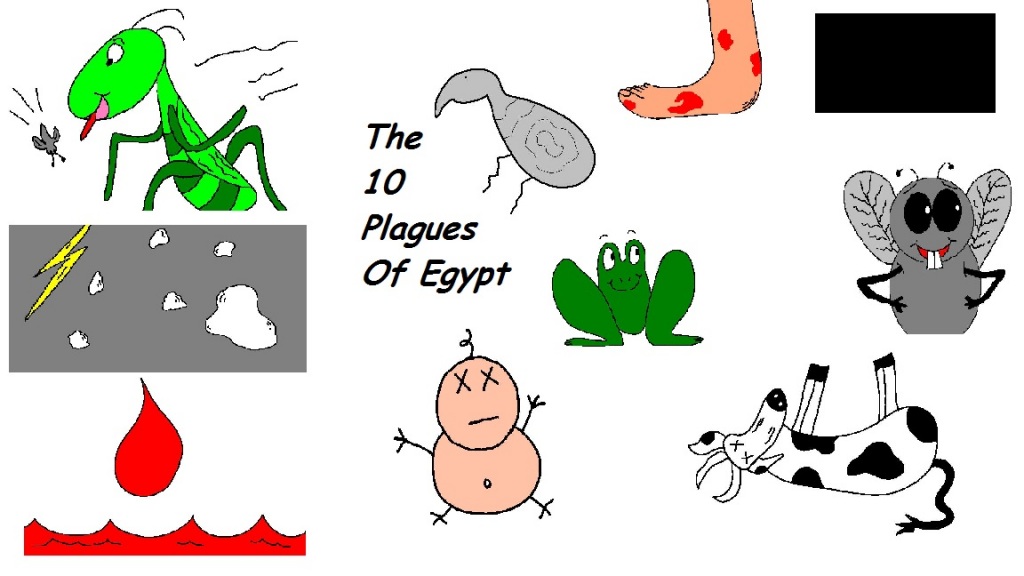 Pharaoh then summoned wise men and sorcerers, and the Egyptian magicians also did the same things by their secret arts
Ex 7:11

Yet Pharaoh’s heart became hard and he would not listen to them, just as the Lord had said.
Ex 7:13

1. The Plague of Blood

But the Egyptian magicians did the same things by their secret arts, and Pharaoh’s heart became hard Ex 7:22

2. The Plague of Frogs

But the magicians did the same things by their secret arts; they also made frogs come up on the land of Egypt.

Pharaoh summoned Moses and Aaron and said, “Pray to the Lord to take the frogs away from me and my people, and I will let your people go to offer sacrifices to the Lord.” Ex 8:7-8

But when Pharaoh saw that there was relief, he hardened his heart and would not listen to Moses and Aaron, just as the Lord had said. Ex 8:15

3. The Plague of Gnats

But when the magicians tried to produce gnats by their secret arts, they could not. Ex 8:18

…the magicians said to Pharaoh, “This is the finger of God.” But Pharaoh’s heart was hard and he would not listen, just as the Lord had said. Ex 8:19

4. The Plague of Flies

Then Pharaoh summoned Moses and Aaron and said, “Go, sacrifice to your God here in the land.” Ex 8:25

Pharaoh said, “I will let you go to offer sacrifices to the Lord your God in the wilderness, but you must not go very far. Now pray for me.” Ex 8:28

But this time also Pharaoh hardened his heart and would not let the people go. Ex 8:32

5. The Plague on Livestock

Yet his heart was unyielding and he would not let the people go. Ex 9:7

6. The Plague of Boils

The magicians could not stand before Moses because of the boils that were on them and on all the Egyptians. But the Lord hardened Pharaoh’s heart and he would not listen to Moses and Aaron, just as the Lord had said to Moses. Ex 9:11-12

7. The Plague of Hail

But I have raised you up for this very purpose, that I might show you my power and that my name might be proclaimed in all the earth. Ex 9:16

Those officials of Pharaoh who feared the word of the Lord hurried to bring their slaves and their livestock inside. Ex 9:20

Then Pharaoh summoned Moses and Aaron. “This time I have sinned,” he said to them. “The Lord is in the right, and I and my people are in the wrong. Pray to the Lord, for we have had enough thunder and hail. I will let you go; you don’t have to stay any longer.” Ex 9:27,28

When Pharaoh saw that the rain and hail and thunder had stopped, he sinned again: He and his officials hardened their hearts. Ex 9:34

8. The Plague of Locusts

“Go to Pharaoh, for I have hardened his heart and the hearts of his officials so that I may perform these signs of mine among them 2 that you may tell your children and grandchildren how I dealt harshly with the Egyptians and how I performed my signs among them, and that you may know that I am the Lord.” Ex 10:1-2

Pharaoh’s officials said to him, “How long will this man be a snare to us? Let the people go, so that they may worship the Lord their God. Do you not yet realize that Egypt is ruined?” Ex 10:7

Now forgive my sin once more and pray to the Lord your God to take this deadly plague away from me.”  Ex 10:17

But the Lord hardened Pharaoh’s heart, and he would not let the Israelites go. Ex 10:20

9. The Plague of Darkness

Then Pharaoh summoned Moses and said, “Go, worship the Lord. Even your women and children may go with you; only leave your flocks and herds behind.” Ex 10:24

But the Lord hardened Pharaoh’s heart, and he was not willing to let them go. Ex 10:27

10. The Plague on the Firstborn

The Lord made the Egyptians favourably disposed toward the people, and Moses himself was highly regarded in Egypt by Pharaoh’s officials and by the people. Exodus 11:3

Then you will know that the Lord makes a distinction between Egypt and Israel. Ex 11:7

All these officials of yours will come to me, bowing down before me and saying, ‘Go, you and all the people who follow you!’ After that I will leave.” Ex 11:8

Moses and Aaron performed all these wonders before Pharaoh, but the Lord hardened Pharaoh’s heart, and he would not let the Israelites go out of his country. Ex 11:10